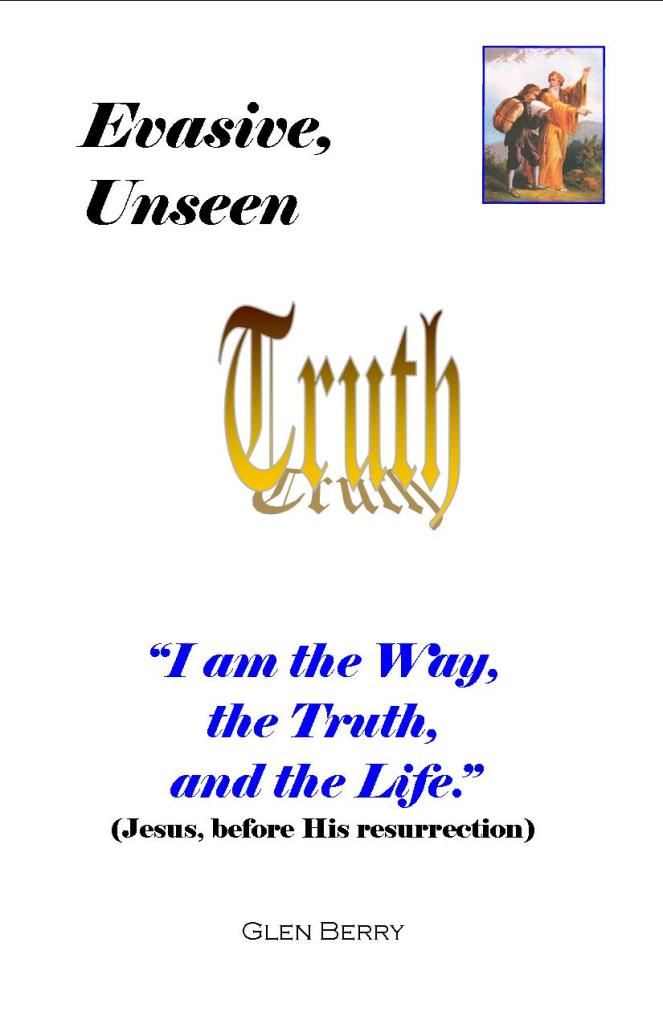 “I am the Way,the Truth,and the Life.”

(Jesus, before His resurrection)

I HAVE BEEN  READING the book, “Death of a Guru,” by Rabi R. Maharaj, whose father was a leading Hindu guru and yogi, and died that way. Rabi himself was also trained as a Hindu guru and worshipped as one. He was to take his father’s place. The book is the wonderful story of his life. The Hindu religion has thousands if not millions of gods. Rabi’s favorite god was his cow, who he spent hours every day worshipping!  Their whole idea is that through the practice of yoga, self-realization, and meditation into “higher states of  consciousness,” they reach various levels  of reincarnation and become god, even to thinking they are the Creator God.

So for years Rabi was deceived into thinking he was believing and teaching others the TRUTH with his many gods. He seemed to be the furtherest thing away from becoming a Christian which would be devastating to his Hindu way of life, and his religious philosophy.  But  God  had  other  plans  and  miraculously revealed Himself to Rabi, and brought him to Himself as the only God and His Savior from sin.  His journey  to Christianity is a gripping one. Surely when he repented and saw the light of Christ Jesus, the very angels of God in Heaven must had rejoiced over this “one sinner that repented.”

In Rabi’s Hindu religion, through yoga and meditation, he was brought into actual contact with evil demon spirits, who he later was to come to realize were only wearing masks to appear as his gods and deities to be worshipped.

Years later, after the Lord Jesus Christ was revealed to him, and after more years of studying the word of God and preaching Christ to others, he began working with drug addicts in the West, who were hooked on LSD and other mind-altering drugs.  He found that these poor deluded and deceived hippies were taking “trips” on drugs and coming into the same contact with evil spirits that he had been so familiar with all his life in his Eastern religion of Hinduism. So his burden became for them, to see them delivered from this demonic control. And at times some of these converts to Christ, heretofore drug addicts and prostitutes, became more willing workers in the Kingdom of God than many of the professing Christians in Western churches who shunned them!

He became aware of some of the hippies committing suicide, and he knew that feeling also. Others that he ministered to were delivered from demon possession and expressed a hunger to know TRUTH. But, like Pilate who gave up Jesus to the Jews, they wondered, WHAT IS TRUTH?

There is only one source of TRUTH, and that is the TRIUNE  GOD.  This God gave to Moses His name as I AM. Jesus said in John 14:6, “I AM the Way, the Truth, and the Life: no man cometh unto the Father, BUT BY ME.”

“If ye continue in My word, then are ye My disciples indeed; and ye shall KNOW the truth, and the TRUTH SHALL MAKE YOU FREE.” (8:31-32)

GO BACK TO THE BEGINNING:

In Genesis 1 the Triune God created the  world and everything in it, In John 1, we are told that EVERYTHING that was made was created by God the Son, Jesus Christ. And God said, “Let us make man in Our image.”  But God gave one restrictive command to Adam and Eve, but Satan, in the form of the serpent, seduced and enticed Eve to break this one command. Adam followed her and the result ever since has been a sin-cursed earth and a sinful, rebellions nature of all mankind, hating God by man’s very nature. “The wages of SIN is death.” And after DEATH, the Judgment!

Before the Fall in Eden, man communicated freely with God the Creator, and could see His truth clearly. But after the fall, his spiritual senses changed, love for God changed, his mind became clouded; he saw truth only through a fog if he saw it at all.  Lo and behold! Even for centuries before Christ, his coming was foretold in Genesis and by the prophets. Yet among those born again by the spirit of Christ and loving and serving Christ in a redemptive state, it is said in 1 Corinthians 13:12—“For NOW we see through a glass darkly; but then face to face: now I know in part; but then shall I know even as also I am known.”

If that be true of redeemed saints until Jesus returns, then how dark and blind must be the ones who still have no love and fear of God. They are BLIND to truth. No wonder they fall into deception, imagining all kinds of false gods, calling demons gods, and worshipping them and SELF as god!  It takes a work of God to even give a sinner a real DESIRE for truth.

No wonder Jesus the Lord says, “No man can come to me, except the Father which hath sent Me draw him: and I will raise him up at the last day.” (John 6:44)

“Oh righteous Father, the world hath not known Thee. . . .” (John 17:25) THAT is why Jesus told Nicodemus that even to SEE the kingdom of God, “ye must be born again.”

Ever since that fall in Eden, man cannot know the truth, cannot see the Kingdom of Heaven, cannot KNOW God apart from the REVELATION of God to his soul. When Peter declared Jesus to be the Christ, the Son of God, Jesus told him that flesh and blood did not teach him that, but it was by the revelation of God.  And in Matthew 11:27—

“All things are delivered unto Me of My Father: and NO MAN knoweth the Son, but the Father; neither knoweth ANY MAN the Father, save the Son, AND HE TO WHOMSOEVER THE SON WILL REVEAL HIM.”  And in verse 25, just above this, Jesus the Son speaks of God the Father who has HID these things from the “wise and prudent,” and has chosen to REVEAL  them “unto babes.”

So the knowledge of TRUTH, even the knowledge of Christ, comes from the revealing hand of God.  A will to be like Christ, a desire to love and please God,  eyes to see, ears to hear, a heart to understand, a quickened (made alive) soul to love—all that pertains to salvation and redemption comes from God or the sinner will remain DEAD in trespasses and in sins. All glory to God alone.

But after all this, Jesus gives a qualified invitation: “Come unto Me, all ye that labor and are heavy, and I will give you rest. Take My yoke upon you, and learn of Me; for I am meek and lowly of heart: and ye shall find rest for your souls.” (Matthew 11:28-29)

Those who truly love the Lord Jesus are not yet perfected. They, too, still see through a glass darkly, and may not have every word just right as they in their faithful zeal witness and speak highly of their Lord Jesus. Still, though every expression may not be just right, the Lord honors His word and His truth, and He honors their labors as new converts come into the Kingdom of Heaven through being born again or from above by the Spirit of God.  There will always be false professions of faith by those NOT born again, but let us thank God and rejoice with the angels in heaven over those who are truly born again, repent, and begin loving our Lord, our God and our Savior, even worshipping in spirit and in TRUTH the Triune God!

Though in this life we but “see through a glass darkly,” there is no excuse for holding false doctrine that falsely depicts the Lord Jesus Christ, that exalts the ability of man or robs God of His glory. God has made it very plain who the REAL Jesus is, the purpose of His work on the cross, and what He has successfully accomplished, as well as His full control of the universe. And though the unregenerate are blind to spiritual truth, the Word of God is clear in teaching true doctrine (truth). But it takes a regenerate heart, (being born again), the Holy Spirit as Teacher, and diligent study. It is essential that we rely on Scripture to interpret itself, rather than being haphazard, lazy or sloppy in twisting the scriptures through private interpretation, thus teaching error as truth.

It is reported, and I just read the following:

In his late eighties, the curtain closing on his public ministry, Billy Graham was interviewed and a significant question asked, “Dr. Graham, if you could go back and relive your ministry, is the foremost thing you would change?”

Graham’s answer, “I would have studied more before starting out, a whole lot more.”

And we can respect that statement from this devout Christian leader.   He was highly promoted and thrust into the popular limelight even as a young man, by men who themselves embraced false doctrine by not rightly understanding what Christ said about Hiimself and His work. So prayerfully STUDY.

IF THE GOD YOU WORSHIP ‘REPENTS, REGRETS AND HAS REMORSE’ OVER HIS ACTIONS OR PLANS, YOU’VE GOT ANOTHER GOD OTHER THAN THE SOVEREIGN GOD OF THE SCRIPTURES

ARE YOU READY FOR THE NEW YEAR?

ARE SOME OF OUR ‘PASTORS’ DUMB DOGS THAT CANNOT BARK?!