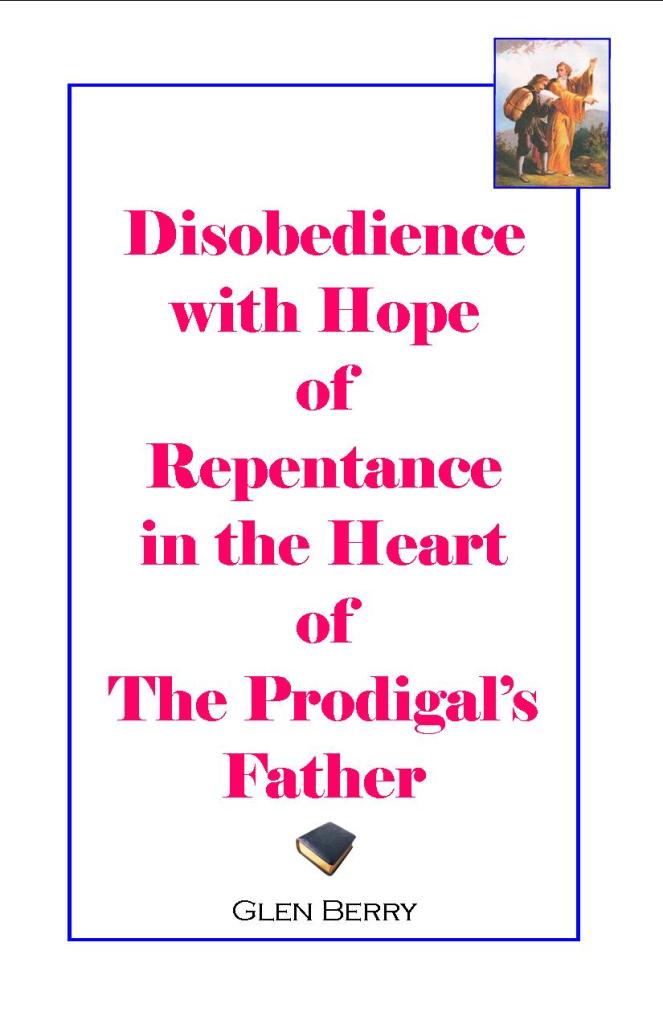 Did that change the father’s love? No, he still loved his wayward son, even though he had chosen the way and pathway to death. It broke the father’s heart, no doubt causing many a tear and was fuel for fervent prayers  to his heavenly Father. But he still hoped and prayed that his disobedient and rebellious son who had wasted his inheritance in riotous living, would come to repentance and return home. In fact, he yearned for that day, and watched daily for signs on that lonesome  road for the return of his wayward and lost son, who had chosen death over life. “The wages of sin is death.”

This is the picture of many a child even today.

WHAT THE PRODIGAL’S FATHER KNEW

We would assume that the prodigal’s father must have known the Word of God,  he probably sensed the truth of God that God “commands all men everywhere to REPENT” (Acts 17:30) Yet, if he knew God, he would have known that “repentance” comes only as a GIFT from God.  (See Acts  5:31 and 2 Timothy 2:25)

The prodigal’s father would have also known that though repentance was a command, and also a gift, that a man hated by God as was Esau, could never have this gift, or have the power to obey this command.  “Lest there be any  fornicator, or profane person, as Esau, Who for one morsel of meat sold his birthright. For ye know how that afterward, when he would have inherited the blessing, he was rejected: for he found NO PLACE OF REPENTANCE, though he sought it carefully with tears.”  (Hebrews 12:16-17).

Then there was Judas Iscariot. He was sorry  for betraying Christ Jesus, the innocent Lamb of God, but it was not with a “godly sorrow,” it was not with the gift of repentance. But rather, “Saying, I have sinned in that I have betrayed innocent blood. And they said, What is that to us? See thou to that. And he [Judas] cast down the pieces of silver in the  temple, and departed, and went and hanged himself.”

So the prodigal’s father must have had very deep and burdensome concern as to where his wayward and lost son would appear in the scheme of things. Would he prove to be an Esau? And prodigals’ fathers would be concerned even today, that their wayward sons would be as a Judas or as an Esau? Esau could not repent with godly sorrow even though he carefully sought repentance with tears. That is a fearsome thing.

The rich man in hell appealed to father Abraham to send someone from the dead to warn his brothers who were still alive on earth. But Abraham said to him, “They have Moses and the prophets; let them hear them.”

“And he [the rich man in hell] said, Nay, father Abraham: but if one went unto them from the dead, they will REPENT.

“And he [Abraham]  said unto him. If they hear not Moses and the prophets, NEITHER will they be persuaded though one rose from the dead.”  (See.  Luke 16.)

Knowing the truth of God, fathers of prodigals know also the truth declared by the Lord Jesus when He said, “I tell you, except ye repent, ye shall all likewise perish.” (Luke 13:5) And in Revelation 2:21, in speaking of Jezebel, Jesus said, “And I gave her space to repent of her fornication; and she REPENTED NOT.”

Godly sorrow unto repentance is a sign of life, a sign that the soul has been quickened or made alive by the Spirit of God. The natural man receives NOT the things of God, neither can he know them, because they are spiritually discerned. And as the Lord Jesus told Nicodemus, that even to see the kingdom of God you must BE BORN AGAIN. (See and study 1 Corinthians 2:14 and John 3:3,7,  Galatians 4,  1 Peter 1:23, and 1 John chapters 2-5.

Knowing such things, the father of the prodigal son must have wondered if his son would ever be more than a lost natural man, counted as a dead man. He must have known that true REPENTANCE would be a sign of spiritual life and a quickening by the Holy Spirit.

I can understand  that purely  from a naturalistic standpoint, when the wayward son left home in rebellion and went his own way, the father felt that the  son was dead to him, and when he returned, no matter in what condition, it could be as though he had returned from the dead. But I rather think that the father realized that living in sin away from God, in satisfied rebellion, that the son was showing that he was dead to God, a child of wrath without repentance toward God, and without a supernatural change wrought by God, the son would be lost forever with death as his destiny and never any eternal life given to him.

Yet, saved or forever lost, he still loved his prodigal son unconditionally. He was still his natural son, and he  was his natural father.  He loved him before he returned, while the son was still wasting his substance in riotous living. Surely, if he were to see him from a distance coming down the road to his father’s house, even if it were NOT in godly sorrow and in repentance, he would have loved him still, as his earthly father. But I can well imagine that when the prodigal son DID return, and it was in sorrow and with REPENTANCE,  then it was indeed like “life from the dead”!   The father of the prodigal could well and rightly then state with great REJOICING (just as the very angels of God in heaven rejoice over even one  sinner that repenteth,  Luke 15:10) just as he said to the obedient elder brother,—

“It was meet that we should make merry, and be glad: for this thy brother was DEAD, and is ALIVE AGAIN; and was LOST, and is FOUND.” (Luke 15:32)

Oh! The  riches of the sovereign grace of God our Savior, to bring back the lost to LIFE and grace.  “And you hath He quickened, who were DEAD in trespasses and sins, wherein in time past ye walked according to the course of this world, according to the prince of the power of the air, the spirit that NOW worketh in the children  OF DISOBEDIENCE.” (Ephesians 2:1-2)

“AMAZING grace, how sweet the sound.”

Yes! This was the hope of the father of the prodigal son.  And it was gloriously realized! Praise the Lord and rejoice with the angels!

IF IT WASN’T FOR THE ANGELS WHICH WATCH OVER HIM, THE CHILD OF GOD WOULD’VE BEEN A GONER A LONG TIME AGO

HOW TO DISCERN WHOM TO PREACH THE GOSPEL TO

COVETOUSNESS – A VICE MOST CONTRARY TO TRUE RELIGION