He Is Not Here 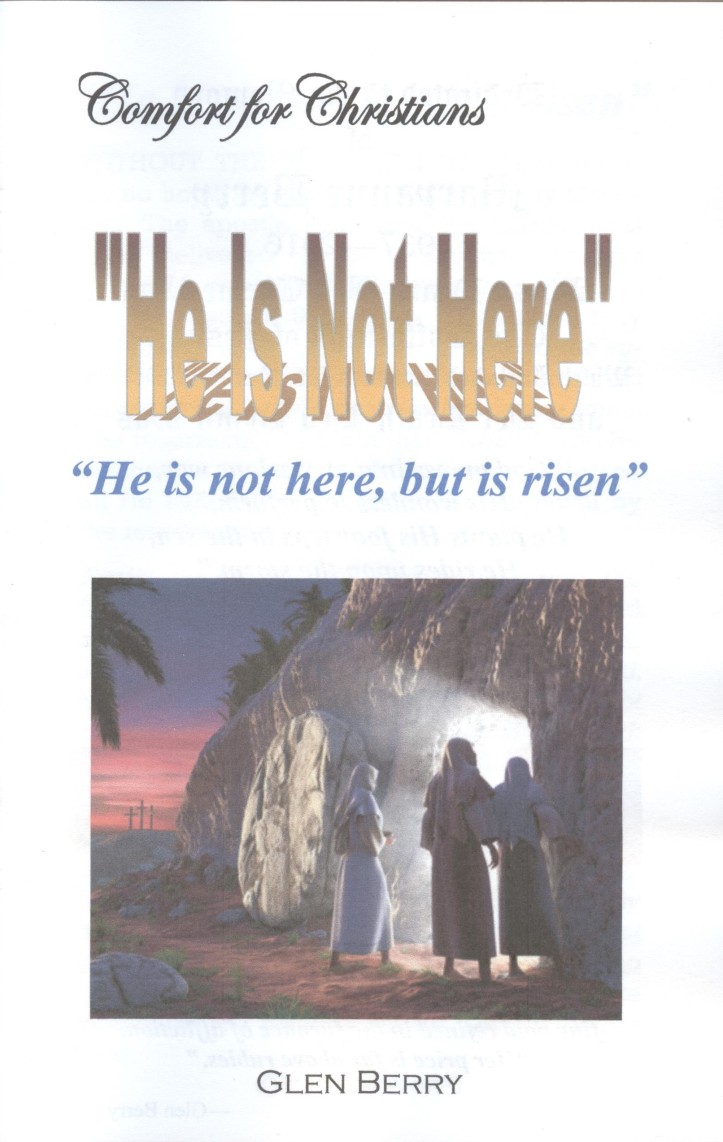 “He is not here, but is risen”

WITHOUT THE RESURRECTION there would be no hope for life after death for any Christian. The apostle Paul says that Christ Jesus “was delivered for our offences, and was raised for our justification.” (Romans 4:24) It is the resurrection that shows us that our holy and just God, God the Father, accepted the supreme Sacrifice of God the Son, the Lord Jesus on the cross, by not leaving Him in the tomb. The resurrection is proof that Christ is who He claimed to be, and God the Father endorsed all He had done and sealed His approval by the resurrection.

Again, the apostle Paul was answering the false teaching of Jewish Sadducees who did not believe in the bodily resurrection.  And he said, “If there be no resurrection of the dead, then is Christ not risen. And if Christ be not risen, then is our preaching vain, and your faith is also vain.” (1 Corinthians 15:13, 14)

In other words, for a person to “believe in Christ,” and yet deny the resurrection of the dead, then such a profession “is vain” and useless.  For Paul continues, “If in this life only we hope in Christ, we are of all men most miserable.” (verse 19) There would be no hope for anyone for life after the grave! There would be NO justification for anyone before God.

“He is not here, but is risen”

You don’t have to read the newspapers or look at television to know that people die every day. But if you do read or glance at the “obituary” section of the newspaper, you will be surprised at how many people are dying every day right around you, some of whom you personally knew. Some die WITHOUT HOPE,  their  belief  and  trust  and  hope  NOT  being totally in Christ Jesus for their eternal salvation.

But for the true Christian believer, there is great and secure hope that just as the Lord Jesus was raised from the dead, so, too, will all Christian saints be raised, for the resurrection did not solely apply to Christ, but He is spoken of as “the firstfruits of them that slept. “But now is Christ risen from the dead, and become the firstfruits of them that slept.” (v.20) In other words, even in nature where there are “firstfruits” there will follow latter fruits. So the rising from the dead by Christ our Leader, is proof that everyone in Him will follow and if they have died in the body, they, too, will be resurrected at the resurrection day and body and soul will again be joined together in completeness and be with Christ and be like Him forever and ever. This is the Christian’s hope. Were it NOT true, there would NEVER be any hope. This is not only the HOPE of the Christian, it is his COMFORT also.

Even now as I write this, I am going through the most devastating and trying times of my entire life: I have lost my precious help-meet that has been at my side almost sixty years. Before God created Eve, He said it was not good for man to be alone, so He made a help meet for him. Now to LOSE that help-meet is indeed devastating and as Horatius Bonar said,  “This is the bitterest of all earthly sorrows. . . . To love tenderly and deeply and then to part; to meet together for the last time on earth; to bid farewell for time; to have all past remembrances of home and kindred broken up—this is the reality of sorrow.  To look upon that face that shall smile on us no more;. . . to press those lips that shall speak to us no more; . . .  to carry  to the tomb the beloved of our hearts, and then return to a desolate home with a blank in one region of our souls, which shall never be filled till Jesus come with all His saints; this is the bitterness of grief; this is the wormwood and the gall.”

YES! Those who have experienced such loss can attest to his words and say, “Amen.”  Yet, even with such a sore trial, we can and we should realize that the Lord Jesus, too, had to taste deeply of the wormwood and the gall. He was such “a man of sorrows and acquainted with grief” that even before the cross, though not yet thirty-three years old, the Jews who saw him took Him to be more like fifty! And add His visage at the cross, we hear the prophet Isaiah say, “His visage was so marred more than any man, and His form more than the sons of men.” (Isaiah 52:14) Then, in grief and yet in thankfulness to God, read Isaiah 53:2-4.

“For He shall grow up . . . as a tender plant, and as a root out of a dry ground: He hath no form nor comeliness; and when we shall see Him, there is no beauty that we should desire Him. He is despised and rejected of men; a man of sorrows, and acquainted with grief: and we hid as it were our faces from Him; He was despised, and we esteemed Him not. Surely He hath borne our griefs, and carried our sorrows: yet we did esteem Him stricken, smitten of God, and afflicted.”

Let us pick up also verses 6 and 7: All we like sheep have gone astray; we have turned every one to his own way; and the Lord hath laid on Him [God the Father laid on God the Son] the iniquity of us all. He was oppressed, and He was afflicted, yet He opened not His mouth: He is brought as a lamb to the slaughter, and as a sheep before her shearers is dumb, so He openeth not His mouth.”

He did this for His sheep that He ordained to save, even all sheep given to Him by the Father  as spoken of in John’s gospel. It is for those for whom He prayed in John 17;  it is for them that He laid down His life. He declared Himself to be the good Shepherd. “I am the good shepherd: the good shepherd giveth his life for the sheep.” (John 10:11) Then in verse 15, after speaking of KNOWING His sheep, He says, “I lay down My life for the sheep.”

When my believing and dying wife was on her death-bed, with her mouth as “dry as a bone” and refusing even a sip of water for the opportunity to taste of just some of Christ’s suffering and relate to it, she told us Christ had no water on the cross. He was offered only vinegar, which He refused. When asked how she could breathe, when the oxygen mask was removed for just seconds, she referred to Jesus’ lungs being pierced as the sword went into His side, and she said, “Jesus couldn’t breathe.” And in whispering to me, referring to Jesus’ suffering, she said, “I don’t know how He could do it.”

So, when Horatius Bonar speaks of the BITTER GRIEF we go through when we lose our loved ones, and that it is “the wormwood and the gall” of life, let us remember and recall, what CHRIST SUFFERED, and it was purely so that HIS SHEEP could live after the grave and have ETERNAL LIFE in glory with Him. The Husband gave His life for His bride. He suffered and died and rose again from the dead, so that each and every sheep the Father gave Him would be forever with Him. He will lose none. None of His sheep thus given and who will be brought to believe and trust in Him,—none will ever perish. Even though “the wages of sin is death,” is it remarkably and amazingly and eternally true that “the gift of God is eternal life through Jesus Christ our Lord.”

Yet there are some who lay claim to His love who are taught that we are not to pray to or worship such a Savior!  May God have mercy and   deliver   them   from   such   man-made,  Satan-inspired cultic bondage!

I have been speaking of the resurrection of the body, which is to take place in the future for all believers in the Lord Jesus Christ. But for your comfort, it can also even now be said of your departed and believing loved one: He (or she) “IS NOT HERE BUT IS RISEN.” The soul has gone to be with the Lord, and will be reunited with the body on the Day of Resurrection.

Whose Death-Bed Theme Was

The Sufferings of Jesus

Which Included Concern for Needs of Others

and Her Death-Bed Hymn Was

“God moves in a mysterious way,

His wonders to perform;

He plants His footsteps in the sea,

He rides upon the storm.”

She wanted “love, joy and peace”

Under God, she was the music of my life,

a pearl of great price,

fine gold refined in the furnace of affliction.

“Her price is far above rubies.”

CAN WE ‘CLAIM’ SOULS FOR CHRIST?!